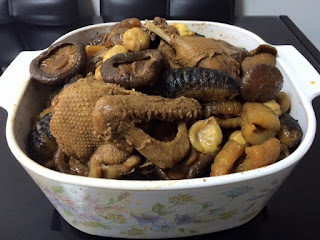 Method
Firstly, cut the duck into 4 portions and season the duck with 2 tsp sea salt, Chinese five spice, pepper and dark soya sauce to marinade for 4 hours.
Then, use big fire to fry the duck for around 10 minutes.
Take out and let I oil dry , put into a pot.
Add mushrooms, sea cucumber, chestnuts and ginger.
Pour dark sauce and sugar into the pot.
Then, add around 3 cup of water, star anise and cinnamon.
Cook for around 20minutes.
Following that, double boil the entire pot for 40 mins, 20 min time just use chopstick to more here n there . After everything cook add in tapioca starch n ready to serve ..
The reason why I fried the duck, was to remove the fatty bits, and make the dish more fragrant.
Stewing then double boiling the duck is to maintain the texture of he duck, and to make sure the sea cucumber n chestnut isn't over cooked.